Today I tried the make-up wheel in the Lush store in Bristol as well (got the idea from Cille). You have to close your eyes while they spin it and then open your eyes again, choosing the first three colours that pop into your eyes, without thinking about favorite colours. All the colours are different kinds of make-up, liquid eyeliners, lipglosses and liquid eyeshadows.

I chose a shiny sea-blue colour, a baby pink and a purple. Those colours represented different things in my life. The first one was something that I had been today or lately, which was Motivated. I've been really motivated about the EF language course and also lately about finding some work, so that was true.

The next colour I picked was the baby pink, which was Glamorous. I was quite surprised about that one, until she started to explain. It was something that I maybe lacked in my life, and yeah, I am not glamorous at all.

The last colour I picked out was the purple one and that turned out to be the most important to me, which is also why I bought it. It was Drive, which basically is a thing that describes me. I would say that drive describes me, because I will not let anything stand in my way to achieve something. I think stubborn can be kinda connected to this one, at least in my case. And Cille said that was true as well.

Drive is a purple lipgloss with a bit shimmer in it. But it's kinda matte, which I really appreciate. And when I applied it to my lips to try it on, the colour wasn't that strong. I think it suits me really well - and I might give you some pictures another time of me wearing it!
I also bought something else from Lush, but I'm gonna show you that another time as well. 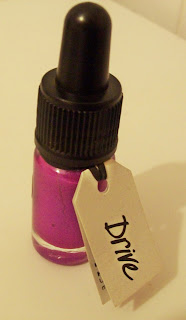 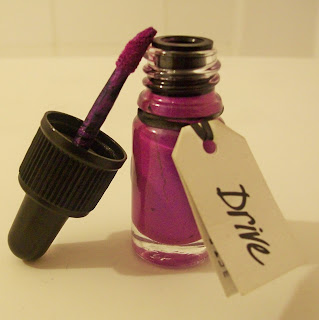 Email ThisBlogThis!Share to TwitterShare to FacebookShare to Pinterest
Tags lipgloss, lush, makeup, personal
Where am I Bristol, Great Britain.