So a while ago I participated in this giveaway on tumblr, where I had to tell what certain bands meant to me, and how music had influenced my life. I got an email back telling me that she liked my stories a lot and she had chosen me and another girl to win her competition. I got extremely excited, and it's actually my second giveaway I've ever won!

I had to choose two bands that I wanted some merchandise from and I chose Of Mice & Men and Pierce The Veil. I like both bands a lot (which some of you might've noticed) and I don't own any merch from either band.

Last week she sent me the stuff, and not even a week later, today, I received it. It came all the way from the states, and I had no idea it'd be here so fast. I thought I had to get my mum to pick up the package at the post office, because I thought it'd arrive when I was in England, which would mean that I'd have to write a power of attorny.

But now, thanks to the sweet Kelsie, I'm the proud owner of an Of Mice & Men t-shirt and wristband and a Pierce The Veil wristband.

Thanks so much, Kelsie! 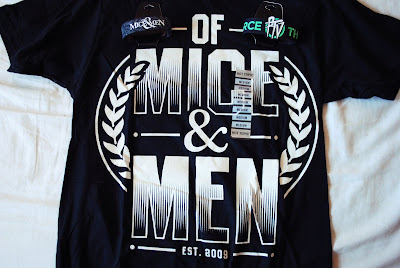 Sidenote: if I suddenly change my language or something, it's just to make it more for everyone - I know for a fact that I have more Danish readers, so yeah.

Email ThisBlogThis!Share to TwitterShare to FacebookShare to Pinterest
Tags merch