I decided to start making a post at the beginning of every new month, where I tell you about what things I've especially enjoyed the previous month. It can be anything from TV-shows, music to products, books and everything in between. Just anything that I've enjoyed a lot.

This kind of post is inspired by Tanya Burr's YouTube videos (and probably a lot of other make-up artists as well). 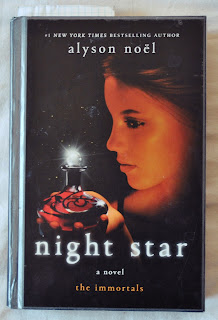 My first favourite thing of May is this book I've been reading, named Night Star. It's written by Alyson Noël, and it's a part of a series called The Immortals. Actually it's the 5th book out of 6, so I'm nearly at the end. I won't say too much about the book, though, but there are immortals involved, which is pretty awesome. It's kinda a Twilight-themed book, just so much better, or at least I think so. And they've just managed to catch my attention over the past few months. My mum got me the first book for Christmas, and then I borrowed the rest of them at the library, because I wanted to be sure I liked the books, before I spent any money on them. I'd definitely recommend these books, if you like the kind of alternative universe, but still with a sprinkle of teenage love. I hope these books will be made into films one day!

My next favourite thing from May is my L´Oreal Studio Silk&Gloss mousse. I've almost used all of it, and I haven't even had it for that long. After I've showered I comb my hair and then put some of this in, before putting it up in a bun, to make my curls more visible. And it really does help! I usually just let my hair dry by itself, but sometimes I blow dry it, but not too often, since it damages the hair a lot.
This mousse is just if you want some extra volume in your hair. It helps on my hair, which is thick, long and curly, so I can definitely recommend it! 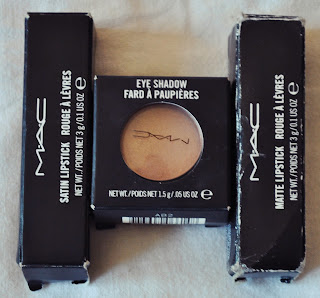 Some other of my favourite things from May (and basically every other month) are the three MAC products I own. I have the Viva Glam I lipstick (it's matte dark red, I'm not even sure if that's it's name?), the Rebel lipstick and the Naked Lunch eyeshadow. I've done a review of all of them here and here, so all I'm gonna say now is that they're amazing and I just love all of them. I love using lipsticks at parties (and trust me, I go to a lot of parties/out for drinks) and the eyeshadow is just great for a nude look. You can even see that the Viva Glam lipstick's packaging is pretty wrecked, and that's because it's been in my bag so much. Most things in there tend to look like that after having been in there for a while. I can definitely recommend these products to everyone!

Since I went to England in May to see one of my favourite bands, Pierce The Veil, live (read about it here), I've of course been listening to all their albums a damn lot through May. And I have to admit that I still am, since I'm still suffering from severe Post Concert Depression. The album I've listened to most of the time is Selfish Machines. It's their 2nd album out of 3, and I just love it a whole damn lot. Almost all the songs on it are my favourite songs, and I'm so glad I got to hear a lot of them live. I think it was actually three of them they played.
I can recommend this album if you like Pierce The Veil, or music in that genre. Wikipedia says it's post-hardcore, experimental rock and progressive rock. All I know is that it's an amazing album.

This nailpolish is one I bought in April, I think. It's a dark red, from Sally Hansen and it's called 610 Red Zin. I think it's amazingly gorgeous, and it can be worn all year around, even though it's quite dark. At the moment I have it on my toe nails, because I'm working in a kitchen, and I can't wear nail polish on my fingers, for obvious reasons, but whenever I can, I wear it. And I just love nail polish, and I wear it as often as I can. Sally Hansen is a great brand, actually, the nail polish lasts long, even without top coat. I don't always remember to put on top coat, but this one sticks to the nail for a while anyway. I don't own any other Sally Hansen products, except for my base/top coat, which is also pretty good.
I'd recommend this product to anyone who loves red nail polish, no matter if it's bright or dark.